Where people choose to live has traditionally been closely tied to where they work, which has helped push home values up very strongly in fast-growing urban job centers — especially on the coasts — and has led to housing scarcity and affordability concerns in several cities. But the post-pandemic recovery could mitigate or even produce the opposite effect and drive a boom in secondary cities and exurbs, prompted not by a fear of density but by a significant shift toward remote work.

Now that more than half of employed Americans (56%) have had the opportunity to work from home, a vast majority want to continue, at least occasionally, according to a recent Zillow survey conducted by The Harris Poll. Among Americans working from home because of the pandemic, 75 percent said they would prefer to continue to do so at least half the time, if given the option, after the pandemic subsides.

And two-thirds (66%) of those employees said they would be at least somewhat likely to consider moving if they had the flexibility to work from home as often as they want.  Recent Zillow research suggests more Americans are at least looking at their housing options. In mid-April, page views of for-sale listings on Zillow were 18 percent higher than in 2019.

Still, only a quarter (24%) of Americans overall said they thought about moving as a result of spending more time at home because of social distancing recommendations.

Prior to COVID-19, only 7 percent of civilian workers in the United States had the option to work from home as a workplace benefit, according to the Pew Research Center, though 40 percent worked in jobs that could potentially be performed remotely. 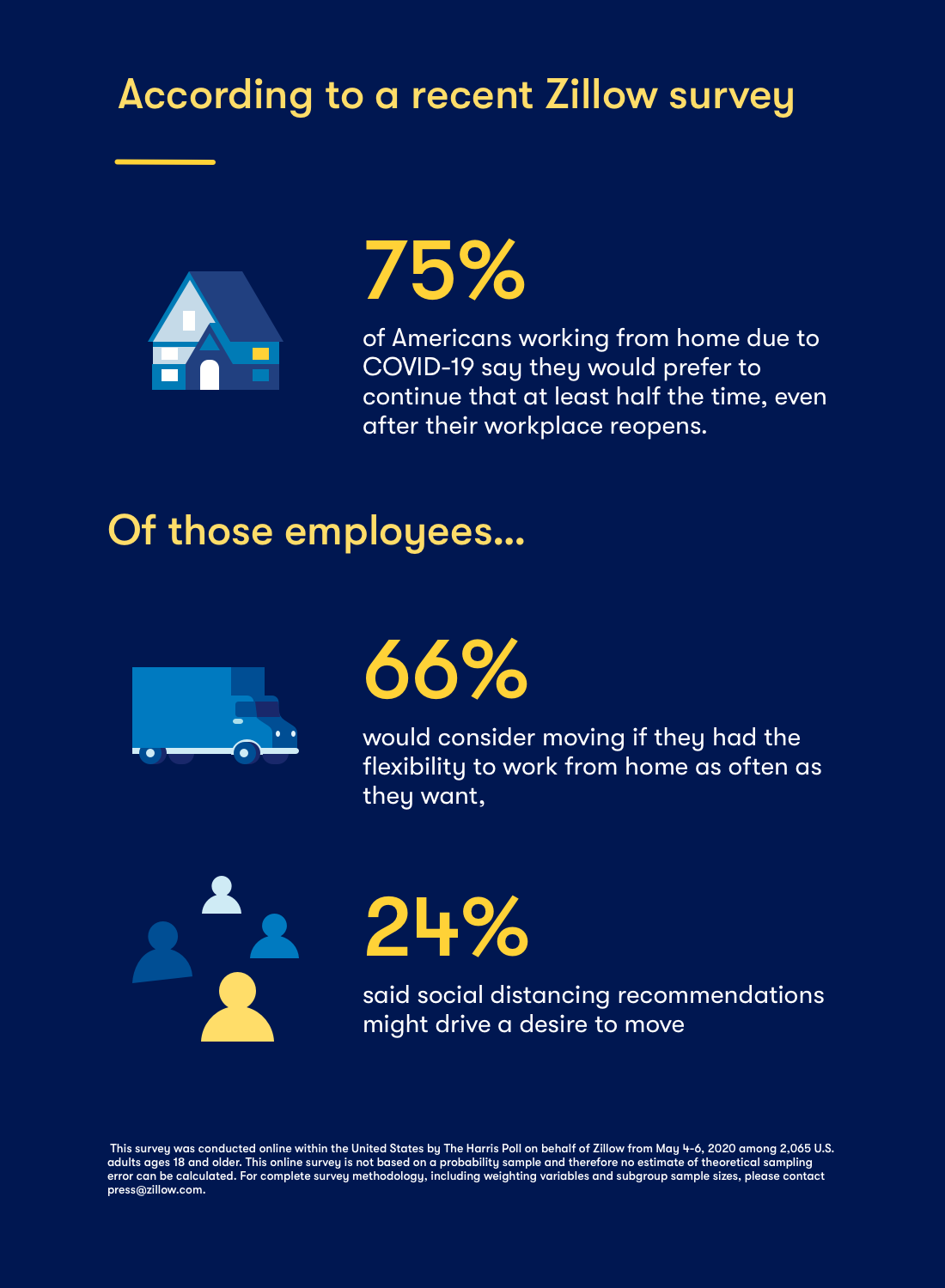 Less than half (46%) of current households have a spare bedroom that could be used as an office, according to a Zillow analysis of American Community Survey data.  But that percentage drops off by more than 10 points in dense, expensive metros such as Los Angeles, New York, San Jose, San Francisco and San Diego, where far fewer homes have spare rooms.

When it comes time to move, home shoppers who can work remotely may seek out more space — both indoor and outdoor — farther outside city limits, where they can find larger homes within their budget.

Moving away from the central core has traditionally offered affordability, at the cost of time and maybe gas money. Relaxing those costs by working remotely could mean more households choose larger homes farther out, easing price pressure on urban and inner-suburban areas. However, that means they’d also be moving farther from the wide variety of restaurants, shops, yoga studios, art galleries and other amenities typically associated with denser, urban locales. Given the value that many residents place on access to these features, we’re unlikely to see a large-scale rise of rural homesteaders. Instead, future growth driven by widespread remote work opportunities would likely favor suburban communities or secondary cities that offer those amenities along with more spacious homes and larger lots.

Previous Zillow research found renters, buyers and sellers overwhelmingly agreed that the longest one-way commute they’d be willing to accept when considering a new home or job was 30 minutes.

This new survey from Zillow and The Harris Poll finds those priorities appear to change if people have the flexibility to work from home regularly. When given that option, half of those who are able to do their job from home (50%) say they would be open to a commute that was up to 45 minutes or longer.

In most major cities, living close to downtown comes at a price. A previous Zillow analysis found in 29 of the nation’s 33 largest metro markets, buyers can expect to pay more per-square-foot for a home within a 15-minute, rush-hour drive to the downtown core. If buyers and renters are not burdened by a five-day-a-week commute, housing in the exurbs, secondary cities and remote bedroom communities may become more viable.

Still, even with remote work as an option, only 10 percent of those able to do their job from home would consider a commute longer than an hour, debunking the theory that urbanites are now seeking out rural living as a result of the coronavirus.

This survey was conducted online within the United States by The Harris Poll on behalf of Zillow from May 4-6, 2020 among 2,065 U.S. adults ages 18 and older. This online survey is not based on a probability sample and therefore no estimate of theoretical sampling error can be calculated. For complete survey methodology, including weighting variables and subgroup sample sizes, please contact [email protected].